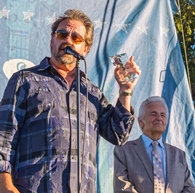 Alan Tompkins, founder of the Bluegrass Heritage Foundation, began the presentation by explaining that the Foundation had created the Bluegrass Star Award in 2010 as a way to honor artists who respected the traditions of bluegrass music and preserved its character while doing an exemplary job of bringing the music to new audiences.  Previous Bluegrass Star Awards have been presented to Rhonda Vincent, J. D. Crowe, Peter Rowan, Sierra Hull, Ricky Skaggs, Del McCoury, Jerry Douglas, and Bobby Osborne. 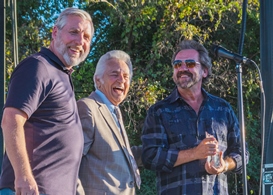 Tompkins noted that Dan Tyminski has had a highly successful career as a bluegrass musician, singer, and songwriter that included time as an early member of the popular Lonesome River Band, a run spanning two decades with supergroup Alison Krauss & Union Station, a solo career that featured the release of the award-winning album Wheels, and his voiceover work on the song Man of Constant Sorrow in the film O Brother, Where Art Thou?, released by the Coen Brothers in 2000.  Dan’s interpretation of Man of Constant Sorrow won him both a GRAMMY award and a CMA Award for Best Single in 2001 and served as the anthem for the superstar Soggy Bottom Boys touring band.  Dan has won 14 GRAMMY Awards and numerous other honors for his solo work and his collaborations with other musicians.

“Dan’s talents have brought bluegrass music to many thousands of new listeners over the course of his career, and he is a worthy recipient of the Bluegrass Heritage Foundation Bluegrass Star Award®.”  For information about Dan Tyminski, visit his website or the Dan Tyminski page on Wikipedia.com.  Video of the award presentation courtesy of David Seay Productions.  Photos courtesy of Nate Dalzell.