Join us for a night of incredible music with national award-winning bluegrass band Sideline along with special guests Kristyn Harris & Hailey Sandoz!

Sideline was started as a “jam band” by a group of professional musicians who all played in other bands and were great friends.  After a few shows, they discovered their own identity and decided to make a full-time commitment to the group.  In just under a decade, Sideline has achieved an impressive list of musical accolades and holds fast to the core of their success – a true love and passion for the music they create.

Sideline will be joined by the entertaining western-music duo of Kristyn Harris & Hailey Sandoz!  American Idol contestant Harris is the five-time reigning International Western Music Association Female Performer of the Year and Sandoz is the reigning International Western Music Association Instrumental Performer of the Year.  This is a show that you don’t want to miss.

Make it a weekend getaway!  The Sheraton McKinney Hotel has given us a 15% discounted rate for our bluegrass weekend.  The Sheraton is located at 1900 Gateway Blvd., McKinney Texas 75070.

We are pleased to host this event at the McKinney Performing Arts Center (MPAC).  The MPAC is the beautiful, multi-purpose theater in the historic Collin County Courthouse.  The MPAC is in the center of the McKinney historic district.  The area has a variety of restaurants and boutique shops that make it the perfect destination for a Saturday afternoon adventure! 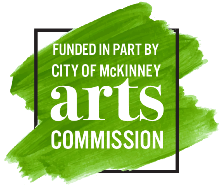 This event is funded in part by the City of McKinney Arts Commission, with great thanks from the Bluegrass Heritage Foundation.