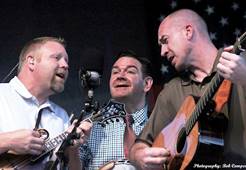 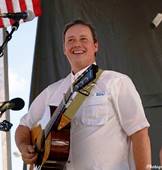 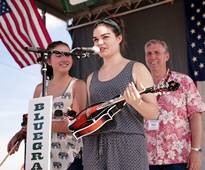 The Wylie Jubilee – Bluegrass on Ballard was a huge hit, with all the fun centered around the big stage in the center of historic downtown Wylie, Texas!  Thousands enjoyed live bluegrass music as well as great food, a spectacular car show, pony rides for the kids, arts and crafts, and more – all free with no ticket required!  Check our photo gallery for lots of great event photos.

Highlights of the day were when Lottie and Olivia King of Alvarado, Texas came on stage with their musical hero John R. Bowman (formerly of Alison Krauss & Union Station, Doyle Lawson & Quicksilver, and the Boxcars) to receive a mandolin and fiddle through the Bluegrass Heritage Foundation Play It Forward! Instrument Lending Program!  Foundation president Alan Tompkins presented the instruments to the King sisters as their family watched the festivities.

Later in the evening, Joe Mullins made a surprise presentation of a new Recording King 5-string resonator banjo for use in the Play It Forward! Instrument Lending Program.  Mr. Mullins eloquently complimented the Foundation on the good that had been done through the program, and expressed his hope that a future banjo superstar might get his or her start on the donated Recording King banjo.  Mr. Mullins noted that Janet Davis Acoustic Music of Bentonville, Arkansas endorses his group and also contributed to the donation.

This event was made possible by Wylie Downtown Merchants Association, City of Wylie, North Texas Equestrian Center, the Bluegrass Heritage Foundation, and many other fine supporting sponsors.  Photos by Bob Compere.