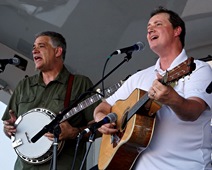 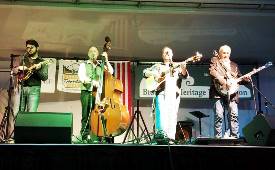 The Wylie Jubilee – Bluegrass on Ballard was a great success again this year, with the fun all centered around the stage in the center of historic downtown Wylie, Texas.  Thousands of folks enjoyed live bluegrass music as well as great food, a spectacular car show, pony rides, arts and crafts, and more – all free of charge.  The Wylie Jubilee – Bluegrass on Ballard was capped off by a spectacular pyrotechnics high above the stage, courtesy of the City of Wylie.  Check our photo gallery for great event photos.

A highlight of the day was when Patience Newsom of Plano, Texas received her beginning banjo through the Bluegrass Heritage Foundation Play It Forward! Instrument Lending Program!  Foundation president Alan Tompkins presented the banjo to Patience and her father at the Foundation table near the stage.  Patience plans to take banjo lessons from Gerald Jones, so we should be seeing her on stage sometime soon!

We were thrilled with Mr. Phil Ferguson of Phil Ferguson & Texas True made a surprise presentation of a beautiful Yamaha 6-string acoustic guitar to the Foundation for use in the Play It Forward! Instrument Lending Program.  Mr. Ferguson complimented the Foundation for its efforts in making bluegrass musical instruments available to young people through the program, and expressed his hope that a future great guitarist might get his or her start on the donated instrument.

This event was made possible by Wylie Downtown Merchants Association, City of Wylie, North Texas Equestrian Center, the Bluegrass Heritage Foundation, and many other fine sponsors.  Photos by Bob Compere, Theresa Laney Clayton-Duffee, and Julie Tompkins.