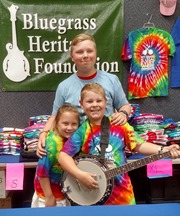 The Bluegrass Heritage Foundation appreciates the support of Mr. Vincent’s family and friends, our other donors and volunteers, and all who help make it possible for us to assist young people like Nate and Tom Jennings.