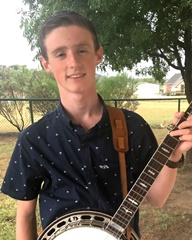 Although still a sophomore in high school (in Texas), Riley enrolled in online classes in audio recording technology and bluegrass music history at the Kentucky School of Bluegrass & Traditional Music in Hyden, Kentucky, a part of the Hazard Community and Technical College and University of Kentucky system.  Dean Osborne directs the bluegrass music program and personally welcomed Riley to the growing ranks of online students at the school.

is an accomplished banjoist, having won the Texas championship in May 2019 after winning the Oklahoma International Bluegrass Festival banjo championship in 2018.  He is a Bluegrass Heritage Foundation Youth Showcase Artist and plays the Huber Workhorse banjo that was bestowed in connection with that honor.  Riley will be competing at the Walnut Valley Festival in Winfield, Kansas later this month for the national banjo championship title.

“We’re all thrilled to see how quickly Riley has developed his considerable musical talents, and even more excited that he wants to include the study of bluegrass music in his collegiate career.  Riley will be in good company at the Kentucky School of Bluegrass & Traditional Music, which includes Bobby Osborne, Dean Osborne, Scott Napier, and Virgil Bowlin among its faculty,” noted Foundation president Alan Tompkins.