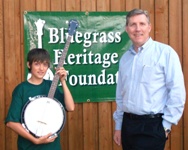 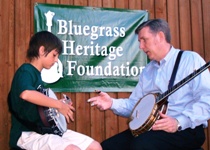 June 4, 2009
Bluegrass Heritage Foundation President Alan Tompkins presented Ryan McKillip, age 14, of Carrollton, Texas, with a new banjo today under the Foundation’s Play It Forward! Instrument Lending Program. Ryan started playing guitar shortly before the 2008 Bluegrass Heritage Festival, and became very interested in playing more bluegrass after attending the Festival and its workshops. Ryan expressed his interest in learning to play banjo to his father, Ross McKillip, who approached the Foundation to find out more about the Play It Forward! program. Alan Tompkins commented that “we are pleased and excited to get this banjo into the hands of a young man who is so excited to play and learn more about bluegrass music.” The Play It Forward! Instrument Lending Program is funded in part by Pizza Hut.