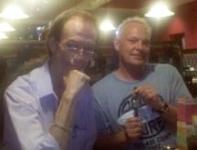 September 9, 2011
After losing their son, John Christian Scott, in a mid-August accident, pioneering bluegrass guitarist Tony Rice and his wife, Pamela, have asked for memorial contributions to be made to a very special cause.

“We have designated the Play it Forward!™ instrument lending program, developed by the Bluegrass Heritage Foundation, as our choice for anyone wishing to make contributions in Chris’ memory,” said the Rices in a statement on August 28.  “We believe it is the best of all possible ways to plant the seeds necessary for bluegrass music to grow and thrive.”

The Rices encourage friends and fans to support the Bluegrass Heritage Foundation by ordering a DVD of Fanning the Fire, a new short film that explores the uniquely American musical form of bluegrass and its broad appeal to beginning players and professionals alike.  The DVD is available for a minimum donation of $15 per copy to the Foundation and may be ordered at the Foundation’s website, BluegrassHeritage.org.

“To think about what Tony and Pamela must be going through is more than I can imagine,” said Alan Tompkins, president of the Foundation.  “I was deeply moved to think that they would consider what the Bluegrass Heritage Foundation has done to be worthy of a memorial for their son.”

Fanning the Fire follows Lucas White, a young Texas musician, from his early interest in flatpick guitar at age 12 to his live performances onstage three years later, and features interviews and performance clips from award-winning artists such as Dan Tyminski, J. D. Crowe, Rhonda Vincent, and Adam Steffey.  In June, the 20-minute film was screened at the Film Festival of Colorado, where it received an award as Best Documentary (Music/Culture Category).  The film also won the “Peoples Choice” award at the Glen Rose Neo-Relix Film Festival in Glen Rose, Texas in September 2011.

Play It Forward!, the Bluegrass Heritage Foundation’s instrument lending program, promotes music literacy and performance skills by providing deserving youth with no-cost access to the primary bluegrass musical instruments such as mandolins, fiddles, banjos, and guitars.  The Bluegrass Heritage Foundation is a 501(c)(3) charity created to preserve and promote the heritage of bluegrass music in America, with a focus on promoting bluegrass in Texas.  The Rices hope it will serve as a role model for other states to follow.

“We so admire the Play It Forward!™ program, Fanning the Fire, and all that is being done by the Bluegrass Heritage Foundation to get instruments into the hands of kids who might not otherwise be given the opportunity, support, and motivation to learn to play them,” said the Rices.  “Young Lucas White is dearer to us, especially in our time of loss, than we could ever express in mere words.”

Sadly, the Rices lost their youngest son, Roman, in 2001.  “Both our sons loved bluegrass music with all their hearts, and both played guitar,” commented Tony Rice.  “If Roman and Chris could have made a choice ahead of time, as a way to be remembered, we believe they would have asked us to do it this way so they could help provide kids with the same opportunities they had while they were growing up.  I hope that any of my fans who can afford to purchase this video will do so, in their memory.”