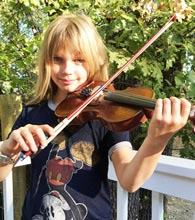 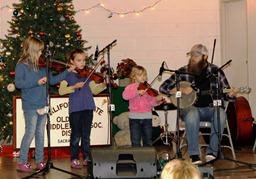 County, California, just north of San Francisco (October 8-11) under the Johnny Lee Vincent Memorial Scholarship Program from the Bluegrass Heritage Foundation.  Lylah has been playing fiddle since she was seven years old and loves old-time and bluegrass music.  She enjoys playing traditional acoustic music with her father (yes, his name is Joe Clark) and younger sisters in the Clark family band.  The Walker Creek faculty will include our friends from the Special Consensus – Greg Cahill, Rick Faris, Dustin Benson, and Dan Eubanks – and many other widely-known players.

Johnny Lee Vincent Memorial Scholarship Program is named in memory of Mr. Johnny Vincent of Greentop, Missouri, a bluegrass pioneer and the father of the Bluegrass Heritage Foundation’s first Bluegrass Star Award recipient, Rhonda Vincent, and bluegrass star Darrin Vincent.  Johnny and his family toured the world as the Sally Mountain Show, performing their special brand of bluegrass music. He was known for his unique banjo style and founded the Sally Mountain Bluegrass Festival in Queen City, Missouri.

The Bluegrass Heritage Foundation sincerely appreciates the support of Mr. Vincent’s family and friends, our other donors and volunteers, and all who attend our events and make it possible for us to help deserving young people like Lylah Clark.