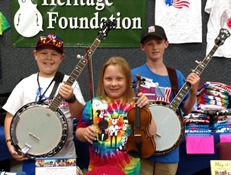 August 8, 2017
12-year-old banjoist Nate Jennings and his little sister, Gigi Jennings, of Tyler, Texas, as well as Riley Gilbreath of Fort Worth, Texas attended the eleventh annual Acoustic Music Camp in Arlington, Texas (July 27-29, 2017) thanks to the Johnny Lee Vincent Memorial Scholarship Program.  Nate attended the camp last year and did a great job on banjo, and Gigi has been making progress as a young fiddler.

The Bluegrass Heritage Foundation appreciates the support of Mr. Vincent’s family and friends, our other donors and volunteers, and all who help make it possible for us to assist young people like Nate and Gigi Jennings and Riley Gilbreath.