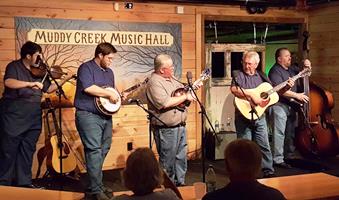 A good group of bluegrass fans enjoyed a special evening of bluegrass and bluegrass gospel music by the Kevin Prater Band at the University Park United Methodist Church on Tuesday night, March 7.  The Kevin Prater Band (from eastern Kentucky) bases their sound on strong vocal harmonies. Built around high trios, their style is reminiscent of the classic Seldom Scene and 1970’s Country Gentlemen performances. They are steeped in the tradition of Gospel music and pride themselves on acapella hymns and great gospel songs. The band loves bringing old favorites to life.  The band’s influences include the Osborne Brothers, Doyle Lawson & Quicksilver, Red Allen, and The Stanley Brothers.