The Bluegrass Heritage Foundation is proud to announce that Hadley’s Southern Kitchen of Hermitage, Tennessee has become a major sponsor of the Foundation’s Play It Forward!™ Instrument Lending Program.  The program helps foster music literacy and performance skills in deserving young people (ages 8-21) by providing free loans of the primary bluegrass musical instruments, as well as other assistance, to aspiring young musicians.  Alan Tompkins, president of the Foundation, said that “we are so thankful that the folks at Hadley’s wanted to support our instrument lending progam.  Receiving support from wonderful folks like Hadley’s is a great help to young people and an encouragement to all the volunteers who help make this program a success.”

Hadley’s Southern Kitchen is the brainchild of founder Tom Hammond. Having been born and raised in the south, Tom grew up eating southern comfort foods like cornbread, white beans, pork tenderloin, and fresh-baked pecan pies. Even as an adult traveling throughout the southern United States, Tom was drawn to local restaurants specializing in these southern foods. This heritage of diverse flavors, combined with the warm and friendly atmosphere the South is known for, made such an impression on Tom that he came up with an idea for a fast casual restaurant that would feature the best of both, where food still tastes like home. 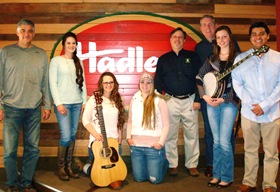 Many connected with the Foundation gathered at Hadley’s in February to pick, grin, and say THANK YOU to Mr. Hammond and the folks at Hadley’s for their generosity.  Pictured at right are Steve Huber of Huber Banjos (a long-time Foundation supporter), Tori, Jocelyn, and Shelby Gold of the Virginia-based bluegrass band Gold Heart (which regularly plays Foundation events), Tom Hammond, Alan Tompkins, banjoist Brandy Miller (our Play It Forward!™ Youth Showcase Artist), and Lucas White (who was featured in Fanning the Fire).

The next time you visit the Nashville area, please stop in at Hadley’s (at 4700 Lebanon Pike in Hermitage), enjoy a great meal, and let them know you appreciate their support of the Bluegrass Heritage Foundation.