Foundation President nominated for IBMA Broadcaster of the Year Award 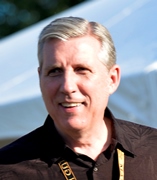 The Broadcaster of the Year Award recognizes outstanding service to bluegrass music in the field of broadcasting.  Recipients are judged by the award committee for their contributions to the field of endeavor, professionalism (including their work in their community), and their demonstrated ability to foster the image of bluegrass music.  Starting with IBMA member recommendations, nominees are chosen by committees of respected musicians and industry leaders.

Alan said that he was “thrilled to be nominated for the Bluegrass Broadcaster of the Year Award.  To be on the list with Kyle Cantrell, Joe Mullins, Ronnie Reno, and Larry Carter is an incredible honor.  My sincere thanks goes out to Joshua Jones, Gus Samuelson, Chuck Taylor, Brett Dillon, Allan Peck, and the rest of the crew at KHYI-FM 95.3 The Range in Dallas for their desire to put bluegrass music on FM radio in Texas, to Gerald Jones for teaching me how to create a show, to Charlie Seraphin for his coaching, to Burton Gilliam for being THE VOICE of KHYI and my show, to my wife Julie for listening to my radio talk all these years, and to Jessica Lynn for her great promo spots.  And of course the greatest thanks goes to all those who listen to the show on FM 95.3 or at www.BluegrassHeritageRadio.com.”

Alan received the IBMA Momentum Award for Industry Involvement in 2015.  That award honors exemplary efforts to further the careers of a new generation of musicians and industry professionals.