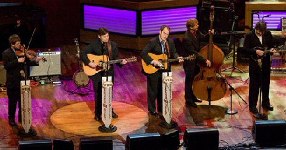 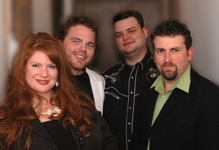 The inaugural Bluegrass WinterJam was held on February 19, 2011 at South Oaks Baptist Church in Arlington, Texas.  The event featured performances by the IBMA award-winning Gibson Brothers and bluegrass favorites Honi Deaton & Dream.  Also performing was Bluefield Express, Clover Girls, Midnight Train, and Bluestem.  The Gibson Brothers presented an instructional workshop from 5-6p to a packed house.  Acoustic Music Camp hosted a jamming workshop taught by Gerald Jones, Nate Lee, and Dennis McBride that was attended by about 40 musicians. Everyone enjoyed a day of great jamming, workshops, and music.  Shirley Owens sent in her review:  “The winter concert was fabulous – the Gibson Brothers are one of my favorite groups and they did not disappoint.  Their workshop was one of the most enjoyable ever.  They were so personable and gracious and, although I know attendees would have held them forever, they indicated that they didn’t want to cut into Honi Deaton’s performance time.  Such class all the way!  Any event in which Bluegrass Heritage Foundation is involved is always well done and we applaud your dedication to spreading the bluegrass word!”