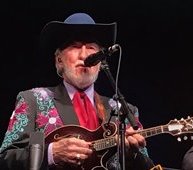 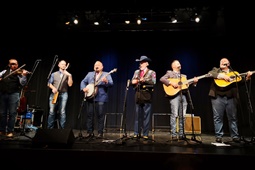 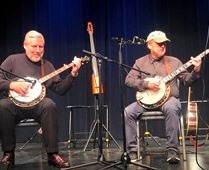 A sold-out crowd was on hand for our Bluegrass Saturday Night 2021 in historic downtown McKinney Texas, the final performance ever in Texas by GRAMMY-nominated Doyle Lawson & Quicksilver.  Bluegrass Music Hall of Fame member Doyle Lawson is one of the most important architects of the bluegrass genre. Highly awarded and recognized over the course of his impressive 58-year career, Lawson is one of the most respected and revered performers in bluegrass music.

Many consider Doyle Lawson & Quicksilver as the “Ivy League” of bluegrass, with Lawson as the dean of students; no other band leader has mentored more musicians who have gone on to become major players in the bluegrass industry and beyond.  His show included a varied array of many important tunes from his Quicksilver years.

Opening the show for Doyle Lawson & Quicksilver were the “At The Very Least” banjo brothers The Gerald Jones and Alan Tompkins, who provided a quick twin-banjo opening for the capacity crowd.  Pictures from the show are in our Special Events Photo Gallery.  This event was funded in part by a grant from the City of McKinney Arts Commission, with thanks from the Bluegrass Heritage Foundation.  Photos courtesy of Julie Tucker, Alan Tompkins, and Kitty Antonsen.