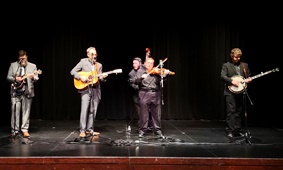 An enthusiastic (and socially-distanced COVID-compliant 25% capacity) crowd was on hand for our Bluegrass Saturday Night 2020 in historic downtown McKinney Texas, for an outstanding performance by 2020 GRAMMY winner Michael Cleveland & Flamekeeper.  According to the Boston Globe, “it’s obvious Michael was destined to become one of bluegrass music’s contemporary stars,” and the band certainly did not disappoint!

Country Music Hall of Famer Vince Gill says “Michael plays fearlessly, and it’s intoxicating to play with him because he makes you play fearlessly! He takes no prisoners, but he plays with restraint and a soul. He plays without abandon.” Michael Cleveland is IBMA’s most awarded Fiddle Player of the Year with 12 wins, has won Instrumental Recorded Performance of the Year six times, and fronts the 6-time IBMA Instrumental Group of the Year.  Michael’s Flamekeeper band included members Josh Richards (guitar), Nathan Livers (mandolin), Jasiah Shrode (banjo), and Chris Douglas (bass).

This event was funded in part by a generous grant from the City of McKinney Arts Commission, with thanks from the Bluegrass Heritage Foundation.