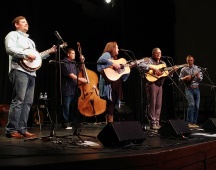 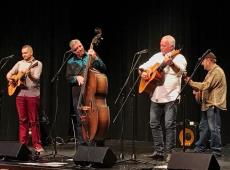 A great crowd was on hand for our Bluegrass Saturday Night in historic downtown McKinney Texas.  The show featured the GRAMMY-nominated Kenny & Amanda Smith Band and Sgt. Pepper’s Lonely Bluegrass Band, along with special guest Downtown String Band.  Pictures from the show are in our Special Events Photo Gallery.  This event was funded in part by a grant from the City of McKinney Arts Commission, with thanks from the Bluegrass Heritage Foundation.

This was the third production by the Bluegrass Heritage Foundation at the McKinney Performing Arts Center (MPAC), the multi-purpose theater in the historic Collin County Courthouse.  MPAC is the center of the McKinney, Texas historic district and is surrounded by a variety of restaurants and boutiques.