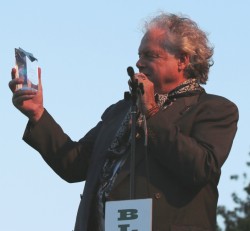 “The Bluegrass Heritage Foundation began a tradition in 2010 of honoring bluegrass artists who do an exemplary job of advancing bluegrass music while preserving its character and heritage,” said Foundation President Alan Tompkins.  “Peter Rowan deserves this award because of his amazing talents and his long record of musical accomplishment.  A native of the state of Massachusetts, he began his professional career with none other than Mr. Bill Monroe and the Bluegrass Boys, living in Nashville and appearing regularly on the Grand Ol’ Opry.  His career spans nearly 50 years and includes collaborations with noted artists such as Tony Rice, David Grisman, Jerry Garcia, Vassar Clements, Norman Blake, Clarence White, and many others.  He’s written such songs as Moonlight Midnight (which he recorded with Tony Rice), Panama Red, In The Land of The Navajo, and others.  We are excited to have Peter Rowan as a recipient of our Bluegrass Star Award®.”  For more information about Peter Rowan, visit Peter-Rowan.com.  The award presentation video is courtesy of David Seay Productions.  Photo courtesy of Mr. Derrick Birdsall.