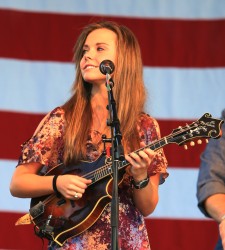 “The Bluegrass Heritage Foundation began a tradition in 2010 of honoring bluegrass artists who do an exemplary job of advancing bluegrass music while preserving its character and heritage,” said Foundation President Alan Tompkins.  The previous three Bluegrass Heritage Foundation Bluegrass Star Awards® have been awarded to Rhonda Vincent in 2010, J. D. Crowe in 2011, and Peter Rowan in 2012.  “Sierra Hull deserves this award because of her amazing talents, her respect for the character and heritage of traditional bluegrass music, and her effectiveness in bringing bluegrass to new audiences.  She is a graduate of the American Roots Music Program at the prestigious Berklee School of Music, and in her early twenties has already been nominated for five awards in three years by the members of the International Bluegrass Music Association.  She’s already given performances of broad cultural importance at Carnegie Hall, the Kennedy Center, and the National Prayer Breakfast.  We are excited to watch Sierra as she brings her incredible music to people who otherwise might not be open to listening to bluegrass, and we are so proud to have Sierra as a recipient of our Bluegrass Star Award®.”  For more information about Sierra Hull, visit her website at SierraHull.com.  The award presentation video is courtesy of David Seay Productions.  Photo courtesy of Mr. Derrick Birdsall.