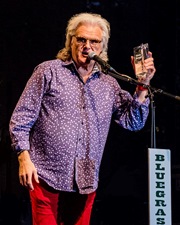 Ricky Skaggs, a 15-time GRAMMY-winner, was honored with the Bluegrass Heritage Foundation’s Bluegrass Star Award® on Friday, October 20, 2017 at the Bloomin’ Bluegrass Festival and Chili Cook-Off in the Farmers Branch Historical Park in Farmers Branch, Texas.

“In 2010, the Bluegrass Heritage Foundation began a tradition of honoring bluegrass artists who do an exemplary job of advancing the music and bringing it to new audiences while preserving its character and heritage,” said Alan Tompkins, president of the Bluegrass Heritage Foundation.  The previous Bluegrass Star Awards® have been awarded to Rhonda Vincent, J. D. Crowe, Peter Rowan, Sierra Hull, Del McCoury, and Jerry Douglas. 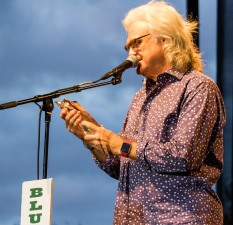 Ricky Skaggs has had an incredible career in bluegrass music, and started playing on stage with artists including Bill Monroe, Lester Flatt, and Earl Scruggs before he was seven years old.  He played bluegrass music as a member of the Clinch Mountain Boys, JD Crowe & The New South, and Boone Creek before touring with Emmylou Harris’s Hot Band and beginning his solo country music career.

As a country singer, he achieved 12 #1 hits, 8 CMA awards, and 8 ACM awards, and became the youngest member ever of the Grand Ole Opry.  Over the years, he’s teamed up with Keith Whitley, Bruce Hornsby, Phish, Ry Cooder, the Whites, Barry Gibb, and many others.  He holds an incredible 15 GRAMMY awards as well as an honorary doctorate from the Berklee School of Music, and since 1996 has led his incredible nationally-renowed and award-winning bluegrass band, Ricky Skaggs & Kentucky Thunder.

Ricky Skaggs is a true superstar and an innovator who came from bluegrass music roots and made the whole world sit up and listen.  The Bluegrass Heritage Foundation is proud to have him as the recipient of its seventh Bluegrass Star Award®.  For information about Ricky Skaggs, visit his website at RickySkaggs.com.  Video of the award presentation courtesy of David Seay Productions.  Photos courtesy of Nathaniel Dalzell.