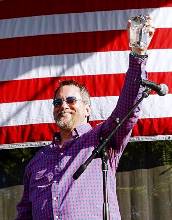 “In 2010, the Bluegrass Heritage Foundation began a tradition of honoring bluegrass artists who do an exemplary job of advancing the music and bringing it to new audiences while preserving its character and heritage,” said Alan Tompkins, president of the Bluegrass Heritage Foundation.  The previous Bluegrass Star Awards® have been awarded to Rhonda Vincent, J. D. Crowe, Peter Rowan, Sierra Hull, and Del McCoury.  “Jerry Douglas has had an incredible career in bluegrass music spanning much of the past five decades.  He holds an incredible 14 GRAMMY awards, a National Heritage Fellowship Award from the 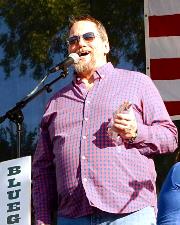 Jerry Douglas has toured and recorded with Alison Krauss & Union Station for over 20 years and founded the GRAMMY-winning band The Earls of Leicester.  Jerry has recorded with artists such as Eric Clapton, Ray Charles, Mumford & Sons, Elvis Costello, and Dolly Parton, bringing the bluegrass sound to audiences everywhere.  Jerry has brought bluegrass to many who might never have been interested in it before hearing him, and well deserves our Bluegrass Heritage Foundation Bluegrass Star Award®.”  For information about Jerry Douglas, visit the Jerry Douglas page on Wikipedia.com.  Video of the award presentation courtesy of David Seay Productions.  Photos courtesy of Bob Compere.