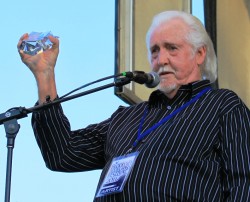 “The Bluegrass Heritage Foundation began a tradition in 2010 of honoring bluegrass artists who do an exemplary job of advancing the music while preserving its character and heritage,” said Foundation President Alan Tompkins.  “Mr. Crowe deserves this award because of his incredible talent and long record of musical accomplishment.  Crowe’s career spans more than 50 years of playing and recording with some of the most talented and influential musicians ever to play bluegrass music, including Jimmy Martin, Ricky Skaggs, Tony Rice, Jerry Douglas, Keith Whitley, Doyle Lawson, the Bluegrass Album Band, and so many more.  We are excited to have J. D. Crowe as a recipient of our Bluegrass Star Award®.”  The award presentation video is courtesy of David Seay Productions.  Photo courtesy of Mr. Derrick Birdsall.