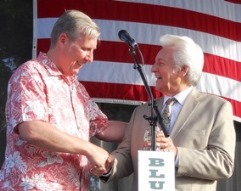 “In 2010, the Bluegrass Heritage Foundation began a tradition of honoring bluegrass artists who do an exemplary job of advancing the music and bringing it to new audiences while preserving its character and heritage,” said Alan W. Tompkins, president and founder of the Bluegrass Heritage Foundation.  The previous Bluegrass Star Awards® have been awarded to Rhonda Vincent, J. D. Crowe, Peter Rowan, and Sierra Hull. 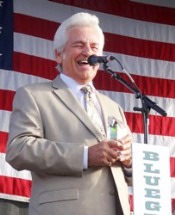 “Del McCoury has had an incredible lifetime career in bluegrass music spanning the better part of six decades.  He’s won almost every award given to musicians in our industry, including a GRAMMY and a National Heritage Fellowship Lifetime Achievement Award from the National Endowment for the Arts, has played bluegrass music on national television, and was a Bluegrass Boy alongside Bill Monroe.  You just can’t get much more ‘true bluegrass’ than that.  Del McCoury has played and recorded with artists as diverse as Phish, the String Cheese Incident, and Steve Earle, bringing the bluegrass sound to audiences far and wide.  Del has brought bluegrass music to many who might never have heard it or been interested in it before hearing him, and is an ideal recipient for our Bluegrass Heritage Foundation Bluegrass Star Award®.”  For more information about Del McCoury, visit the Del McCoury Band website.  Watch the award presentation video below, courtesy of David Seay Productions for highlights of Del’s career – in Del’s own words.  Photos are courtesy of Julie Tompkins.