Bobby Osborne, a veteran bluegrass musician and a GRAMMY-nominated member of the Grand Ole Opry, was honored with the Bluegrass Heritage Foundation’s Bluegrass Star Award® on Saturday, October 20, 2018 at the Bloomin’ Bluegrass Festival in the Omni Dallas Hotel at Park West in Farmers Branch, Texas.  Osborne was joined on stage by Del McCoury and Sierra Hull, both of whom have received the Bluegrass Star Award.

“In 2010, the Bluegrass Heritage Foundation began a tradition of honoring bluegrass artists who do an exemplary job of advancing the music and bringing it to new audiences while 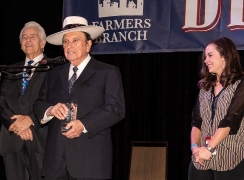 “Bobby Osborne has had an incredible career in bluegrass music spanning 70 years, which includes the time he spent serving his country as a United State Marine.  He’s in the Bluegrass Hall of Fame not once but twice – both as a member of the Lonesome Pine Fiddlers and as a member of the Osborne Brothers – the group that he founded with his brother, Sonny Osborne.

Throughout his career, Bobby Osborne found new and innovative ways to make bluegrass music interesting for listeners all around the country.  He’s brought bluegrass to thousands of new listeners during his career and is certainly deserving of our Bluegrass Heritage Foundation Bluegrass Star Award®.”  For information about Bobby Osborne, visit his website or the Bobby Osborne page on Wikipedia.com.  Video of the award presentation courtesy of David Seay Productions.  Photos courtesy of Perry Callahan.