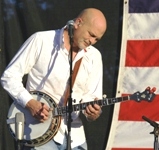 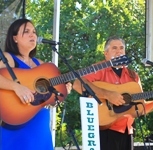 The Bloomin’ Bluegrass Festival 2011 was held on Friday and Saturday, October 14-15, 2011 in the beautiful Farmers Branch Historical Park in Farmers Branch, Texas and was completely free and open to the public.  The festival was presented by the City of Farmers Branch, Texas and the Bluegrass Heritage Foundation.  Musical performances were provided by J. D. Crowe & The New South, Lonesome River Band, Russell Moore & IIIrd Tyme Out, Seldom Scene, Kenny & Amanda Smith Band, The Whites, Michael Cleveland & Flamekeeper, Special Consensus, Honi Deaton & Dream, Gerald Jones & Clone Mountain, The Herrins, and Highlands Crossing. A great crowd was on hand both days to enjoy the sparkling weather, incredible music, fabulous rose gardens, the historical structures in the Farmers Branch Historical Park, a blacksmithing demonstration, vendors, and loads of jamming.  Saturday’s festivities included the presentation of the Bluegrass Heritage Foundation’s Star Award to J. D. Crowe.  The City of Farmers Branch even provided televised coverage of the American League Championship Series Game #7 on Saturday night between the (victorious) Texas Rangers and the Detroit Tigers in the Historical Park. The bluegrass continued full speed on stage, and listeners enjoyed both the music and a view of the game via a 50′ inflatable screen in the meadow!  Thanks to Derrick Birdsall for the photographs.