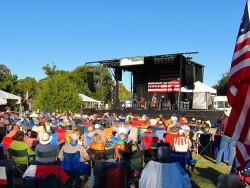 August 10, 2017
The Bloomin’ Bluegrass Festival & Chili Cook-Off, now in its eighth year and presented by the Bluegrass Heritage Foundation and the City of Farmers Branch, Texas, has been nominated for a second time for the Bluegrass Event of the Year Award by the International Bluegrass Music Association.  The award will be presented at the IBMA’s World of Bluegrass Conference Luncheon on Thursday, September 28, 2017, in Raleigh, North Carolina.

Alan Tompkins commented that “this nomination is a wonderful tribute to all the people, both those associated with the Bluegrass Heritage Foundation and the City of Farmers Branch, Texas, who have worked so hard for so many years to make this a great event.  We truly value and honor all the folks who come out to enjoy the music, jam, socialize, and have a great time each year at Bloomin’.  We are humbled by this second nomination, and express our sincere appreciation to the International Bluegrass Music Association.”

According to IBMA, the award recognizes events for their outstanding accomplishment and service to bluegrass music in the field of event production. The recipients are judged by the IBMA’s select committee for their overall contributions to the field of event production, professionalism and quality of presentation, work furthering bluegrass in their area of service, and demonstrated ability to foster bluegrass music’s image.