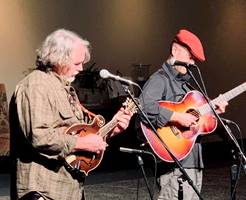 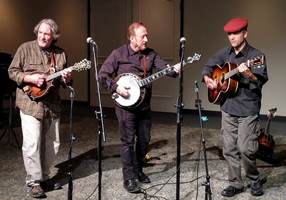 A great crowd of folks joined us for a special evening of music with Steve Smith & Tim May on Friday night, Feb. 22 2019, including a whole busload of folks from Temple Baptist Church in Flower Mound, Texas.  Mandolinist/vocalist Steve Smith and Nashville guitarist/vocalist Tim May brought us an evening of original, traditional, and swing music.  These two have collaborated in studio and on stages nationwide, and their show featured tight vocals and guitar, mandolin, octave mandolin, and twin mandolin works in a broad range of styles.  “The” Gerald Jones even stepped in to provide banjo accompaniment and his usual comic relief!

Cuts from Tim & Steve’s latest record, a tribute to the music of the Carter Family, were featured.  The duet album includes a swing version of Little Darlin’ Pal of Mine and a haunting acapella duet of Sailor Boy.  Over 250 songs were considered for the album, and the duo narrowed the selection down to their eight favorites.  Our thanks to Tim and Steve for an evening of terrific acoustic music.