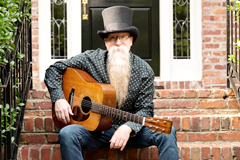 A nice crowd joined us for a special show with David Grier on Tuesday night, Nov. 24, 2021.  David provided an entertaining evening of amazing guitar work, vocals, and stories from the road.

Grier began playing guitar at age six and is now regarded as one of the premier acoustic guitarists in the world, along with his early influences – Doc Watson, Tony Rice, and family friend Clarence White.  He was ecognized by Acoustic Guitar Magazine in 2000 as one of the Artists of the Decade and has been named Guitar Player of the Year three times by the International Bluegrass Music Association.